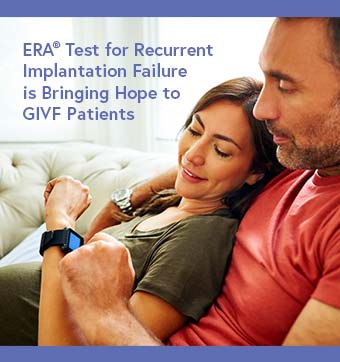 For women diagnosed with Recurrent Implantation Failure (RIF) getting pregnant can often feel like a hopeless endeavor, due to a recurring cycle of disappointment.

RIF is the failure to achieve clinical pregnancy after at least three implantation attempts in a healthy woman with good-quality embryos. This phenomenon is frustrating to in vitro fertilization (IVF) doctors and can be devastating to potential parents. After years of testing and successes, the ERA has brought hope to many of these patients.

ERA (Endometrial Receptivity Array or Analysis) is a genetic test, patented by Igenomix, which evaluates the status of a woman’s endometrial receptivity to prevent implantation failure. Results have shown that in some women there is an optimum window of implantation (WOI), and if a skilled IVF doctor implants a healthy embryo during that window, success rates for pregnancy can improve. According to Igenomix, “the ERA test resulted in a 74% pregnancy rate in patients with implantation failure.” (Ruiz-Alonso et al., Fertil Steril. 2013. Clemente-Ciscar et al. 2018 submitted).

Doctors and scientists have been studying genetic tests for RIF, with promising results, for just over a decade. According to test results published in Reproductive Medicine and Biology, “for patients with unexplained RIF, there is a significance in searching for their personal window of implantation (WOI) using the ERA, considering the percentage of those who were not receptive and the pregnancy rates that resulted. By transferring euploid embryos in a personal WOI, much better pregnancy rates are expected.” (Hashimotot et al., Reprod Med Biol. 2017 Jul; 16(3): 290–296. Published online 2017 Jun 27. doi: 10.1002/rmb2.12041)

ERA Testing at the Genetics and IVF Institute

Though ERA was recently featured on ABC news as new technology, Dr. Laurence Udoff, of the Genetics and IVF Institute, has been administering this test to RIF patients for several years, and was an early adopter of testing for the ideal WOI. Dr. Udoff has worked with leading experts for nearly 10 years to help patients overcome RIF by studying the specific time in a woman’s cycle when her uterus may be more receptive to the embryo and thus more likely to implant.

Dr. Udoff spoke of the advances in medical knowledge about RIF and ways that IVF and proper testing can overcome it. “There’s a fair amount of old science that suggested in humans there is a pretty broad window of implantation, so that there are many days at least that a good embryo may implant. More recent science has suggested that may not be true, that window might be fairly narrow. With IVF, we are putting an embryo back in on a day of our choosing, and if we choose the wrong day, the embryo may be just fine but it’s going in at the wrong time. Too early or too late, it won’t work.”

After several failed attempts to implant a healthy embryo, Dr. Udoff may recommend the ERA, which has provided very promising results for his patients.

“The results were pretty remarkable. It was like a turn around. In a group for which nothing was working, they were easily up to the normal expected success rates if not a little beyond that.”

A patient of Dr. Udoff, who is also a nurse, can attest to her success with the ERA and to its success with her patients. As a medical professional, she knew of the test beforehand and after two failed attempts asked if she would be a candidate for ERA. Being at an advances age for fertility, at 41 years old, she felt that she didn’t “want to waste her embryos and that they were very precious.” She noted that she wanted to give herself that best chance at success; she “wanted to make sure everything was perfect.” Now happily pregnant and close to her delivery date, she has become an advocate for the ERA and tells her RIF patients that “there is an option for hope.”

Are You a Candidate for the ERA TEST?

The ERA is not for everyone, but specifically for women who have had multiple failed attempts at implanting a healthy embryo. According to Igenomix, 3 in every 10 patients have an abnormal window of implantation. However, if you have had at least three failed attempts to implant, and the cause does not appear to be health related, you should ask your reproductive endocrinologist about the ERA test to ascertain your optimum window of implantation.